When we lived together, before compiling a playlist was a thing, Llŷr and I would often make each other mix-tapes, and later mix CDs, a habitually eclectic mix of stuff we knew the other would like, or already owned but sounded good in the context of the playlist, or wanted to introduce the other one to.

We would take it in turns: I’d do one for him, a week or so later I’d get one back, and so on. There was no one-upmanship going on here, no “Don’t you know this???”, more a mutally respectful “You probably know this, but if not, you’ll like it, I think.”

Often, one of us putting a song on a mix CD would induce the other into putting a different song by the same artiste on the reply CD. It was our way of saying, “Yeh, I know them, that one’s pretty good, but have you heard this…?”

By way of an example, one day I put this on a mix CD, pretty much the only song I knew by the group at the time:

And he came back with this, which I later found out was the very next track on their eponymously titled album, which I didn’t have at the time:

Fountains of Wayne – Sink to the Bottom

Okay dude, you won that one.

Welcome back to Christmas corner.

Another couple of absolute belters for you this morning.

First up, from the cannot-put-a-foot-wrong-in-my-eyes canon of work that is Eels. Or eels if you prefer. Either way, it’s the work of Mark Oliver Elliott, or “E” as he is more widely known. E is the son of Hugh Everett III, who came up with the concept of quantum theory (which, try as I might, I just simply do not understand. I know from Wikipedia that it’s “the body of scientific principles that explains the behaviour of matter and its interactions with energy on the scale of atoms and subatomic particles”, but I feel less intelligent, not more, than I did when I started typing that out.)

Anyway, quantum physics isn’t very Christmassy (or is it? It might be. See, no idea) so here’s something that definitely is (or finitely, if I want to try and be clever and do a physics gag): 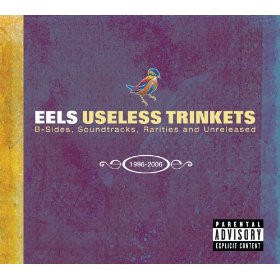 Next a band whose eponymous debut album I love and will feature on these pages again at some point, but who blotted their proverbial copybook when they released “Stacey’s Mom”, which I appreciate makes me sound like one of those idiots who begrudge their favourite band any kind of commercial success.

Fountains of Wayne – I Want an Alien for Christmas

I would like to take this opportunity to remind you that an alien is for life and not just for Christmas. And anyway, how would you wrap the boggle-eyed, bottom probing, little bugger?