Deep breaths. Come on, we can do this.

It is 1985. Oh yes it is. The year that I think it’s fairly safe to say that my record buying took off with a vengeance. And it’s fair to say, it’s quite a mixed bag. Some of which, in direct contradiction to my “There’s No Such Things as a Guilty Pleasure” tag line, I cannot believe I am about to confess in such a public arena that I spent money on.

There, that’s piqued your interest, hasn’t it?

But before we get cracking, some admin. Firstly, as there’s quite a few records for me to reminisce over, I’ll split 1985 into three different posts. Secondly, I can’t really go any further without talking a little more about the behemoth that was Band Aid’s “Do They Know It’s Christmas”, partly because it topped the charts for what seemed forever at the start of the year, but when researching this post I was surprised to find that actually it was toppled from pole position on 13th January.

I think there are two reasons it dropped from the top so quickly:

So to kick things off in 1985, a song from 1984, which, in light of the above, and even more so when you look at the shabby scaremongering this week about Jeremy Corbyn, sums up the political bias of the press in typical style.

I guarantee that when you watch this you will think two things:

1: Blimey (or insert your own swear word/exclamation of preference here), doesn’t he look young?, and

2: Blimey (or insert your own swear word/exclamation of preference here),  nothing much has changed since 1984, has it?

But I digress. Where was I? Ah yes – Band Aid and admin. Thirdly, I am obliged to mention The Quo somewhere, so lets get it out of the way now, shall we?

Quo’s Francis Rossi and Rick Parfitt were actually supposed to have lead lines on “Do They Know It’s Christmas?”, but performed them so badly in the studio that they got ditched for Paul Weller, Sting and Glenn Gregory. Their performance is probably explained by the fact that the duo openly admit to turning up at the studio with “shitloads of drugs…coke, dope and all sorts. People were saying, ‘Let’s go and see Doctor Rossi and Doctor Parfitt, shall we?’….” (Rossi has since revealed that he blew £1.7 million on coke in the 1980s, which explains not only why most of their records were, with the benefit of hindsight (mine – everyone else knew it at the time) shite, but also why a chunk of his septum fell out).

They also managed to lock Spandau Ballet in the toilets at the Band Aid recording sessions, so…y’know…s’not all bad.

That’s the admin out of the way: on to the hits!

First up, a song I have already written about, and so I’m going to skip past it now. That song is Kirsty MacColl’s version of “A New England” and you can read all about it and listen to it here: self-referential tosser.

Next up, an artist I have a great deal of affection for, without actually owning very many of his records: Terry Hall. By 1985, he had left The Specials, formed Fun Boy Three, co-written “Our Lips Are Sealed” with Jane Wiedlin of The Go-Go’s, given a helping hand to Bananarama’s career by way of a guest appearance on “It Ain’t What You Do (It’s the Way That You Do It)” (or did Banarama appears as guests on the Fun Boy Three’s version? I never did quite manage to work that out), split from Fun Boy Three, and formed The Colourfield.

Truth be told, The Colourfield marked the start of a decline if not in the quality of Hall’s work, then certainly in the commercial success he achieved. This, though, was their first single, and their biggest hit, and rather lovely it is too: 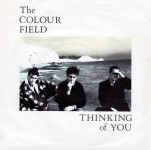 The Colourfield – Thinking of You

Don’t go thinking I’d gone all soft though. Nope, at the start of 1985 rawwwwk was very much where my heart still lay, although I would have to admit my tastes were starting to shift towards more poppy territory.

But wait – who’s this coming over the horizon? A Canadian chap in a checked shirt who seems to marry rock and pop together in perfect harmony? Just what The Doctors ordered! And so it was that I bought this:

Bryan Adams – Run to You

Now I know what you’re thinking. You’re thinking this is one of the records I’m embarrassed to admit to owning, right? Well no, actually. See, in 1985 The Bryster (as nobody has ever called him) was not yet the purveyor of power ballads and Number One hogger that we have since come to know and hate, for whilst it was actually released in 1984, it was in 1985 that his “Reckless” album was, frankly massive. I bought that too, but not just yet, so we’ll come back to that later, but suffice it to say it was packed with, yes, power ballads (“Heaven“), enduring power pop (“Summer of ’69“) – c’mon, everyone loves that record, don’t they? – and a rather shonkingly awful duet with Tina Turner (“It’s Only Love“).

Ah, Tina. Tina Turner. It is to you I turn to present the “What on Earth Was I Thinking When I Bought This???” award for the first part of 1985. I have neither clue nor excuse. Maybe I was blinded by the fright-wig. Maybe it was that “riding an invisible horse” dance she seemed to do. I dunno. But somehow, lurking in my record collection, is this:

But I didn’t just go out and buy the single. Oh no. In fact, I didn’t buy, nor have I ever bought, any of her singles. Not for me on this occasion the usual “Buy first single. Buy second single. Like third single? Buy the album” routine I had safely established. No. To compound my shame, I went straight out and bought the fucking album.

I’ll get my coat.

But no. I won’t. Instead, I’m going to turn things round by posting what to my mind is one of the great lost singles from the 1980s, an absolute belter, and if I had to list my favourite singles of all time, this would be right in there:

Big Sound Authority – This House (Is Where Your Love Stands)

Criminally short-lived, Big Sound Authority only released three more singles, none of which managed anything approaching the success of “This House” (which itself only managed to get to Number 21 in the charts) and one album, which also tanked.

And so to Liverpool, and to China Crisis, and a song the title of which I don’t think you’d get away with these days:

Erm, where do you start? Well apparently, it’s about Ray Charles, but quite why they felt the need to point out he was black I have no idea. Let’s skip swiftly on.

I’ve already written about the other single by the next artiste, the godawful incomprehensible babble that was “The Riddle”. Unperturbed by just how terrible that was, I went and bought the follow up and until I came to write this, I’d forgotten that actually it’s rather good. Of it’s time, sure, but rather good all the same.

Needless to say, shortly after this, his own pop career nose-dived dramatically, before being ever so slightly resurrected when he wrote this. Yeh, cheers for that, Nik.

And so, to round off this first look back at 1985, another record that would not just join “This House” in my list of my favourite singles of all time, but would unquestionably nestle squarely in the top ten. The Cult were not a band I remember my brother ever owning any records by, but I think his recent radical change in musical taste had probably rubbed off on me enough to make my ears prick up when I first heard this:

The Cult – She Sells Sanctuary

If ever a record deserves to be played as loudly as possible, it’s that one. And it still sounds as magnificent to these ears today as it did way back then. And I’m not the only one who thinks so: super-cool DJ Erol Alkan used to regularly drop it in his sets (I’ll try and source an example to post for you sometime) and even I witnessed the power of this record first hand. A couple of years ago, a friend of mine was in a band which did an “Indie-okie” night in North London once a month. (The premise: karaoke, but with a live band playing behind the volunteer singer, who would choose from a list of classic Indie tracks. It was as much fun as it sounds i.e. an enormous amount). They asked Hel and I to DJ on the bits in between and we were more than happy to oblige – in fact it was the first time we DJ’d together. Anyway, as everyone was basically there to either sing or to have good laugh at those who did, nobody was expected to actually dance. But that’s exactly what did happen when I dropped this: the dancefloor didn’t exactly go mental, but it suddenly filled up and there was definite movement, enough for one of the band to tap me on the shoulder and say “Steady on – they’re supposed to enjoy our bits more than the records!”.