But no. Not this year.

There’s a running joke in our family that this is how I was when I was younger:

I wish I could protest, but with the benefit of hindsight, that’s a pretty fair depiction of me in my teenage years: contrary, confrontational, argumentative, just plain downright stroppy.

My Dad worked away a lot when I was a kid, often overseas, something which we’ve talked about since; I think he regrets not being around as much as he would have liked as my brother and I grew up, and that he had to leave much of the parental guidance duties to my Mum.

The truth is that for much of my teenage years, I viewed Mother as an adversary, someone to be defeated wherever possible, tiny victories writ large in my budding psyche. It wasn’t till many years later that I came to view my Mum in the way I see her now: the most loyal friend I’ve ever had, and ever will have.

And I remember the day that particular penny dropped. I had just split up with a girlfriend I don’t think either of my parents particularly liked anyway. The split was not in the slightest bit amicable, but when you find out your girlfriend is sleeping with somebody else, there’s only one way the relationship is going to go if you want to retain any sense of dignity or self-worth.

And so it was that one night, drunk, unhappy and alone, I did what I’d heard normal people do when they’re sad. I called my Mum.

She listened as I spilled my heart out, making the right soothing noises as I blubbed through a snot-bubble nose. And when I was spent, her first question was to ask me if I’d heard from an old girlfriend (who they liked, and who I used to bump into around Cardiff every now and then); the sheer audacity, the why-do-you-give-a-fuck-about-her?-she’s-not-even-the-lost-girlfriend-you-should-regret-ness of the question made me laugh and perspective was restored.

So, I thought today I would try and honour my mother and the sage advice she has given me over the years (“Turn that bloody music down”, “You don’t get dessert unless you finish your main”, “You’re not going out dressed like that”, “Please don’t set light to that”) and track down a different country song that referenced mothers or their advice.

The problem is that I tracked down many country songs with Mama in the title, but most of them seem to end up using the word Mama to refer to a partner or lover, which is a whole area I don’t think any of us really want to get into.

But then I stumbled across today’s choice, which seems to pretty much sum things up: 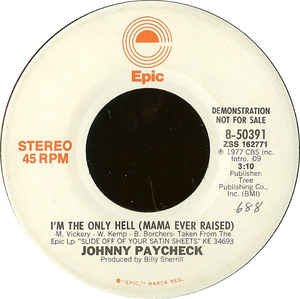 Johnny Paycheck – I’m the Only Hell (Mama Ever Raised)

I suspect that’s not his real surname, by the way.