Last weekend, I posted some songs by the legend that was Scott Walker, and mentioned in passing Jacques Brel, but totally omitted to mention the man who links the two: Rod McKuen.

It was McKuen who “discovered” Brel, translating many of his songs, often turning them into his own Brel-based compositions. He turned Brel’s Le Moribund into Seasons in the Sun, and Ne Me Quitte Pas into one of the songs I posted in my Walker tribute, If You Go Away. He’s popped up on these pages before, when I wrote about Sinatra’s excellent album A Man Alone: The Songs of Rod McKuen (links re-upped – I can’t recommend highly enough that you give the songs in that post a listen).

In that post, I mentioned that I was only aware of McKuen via that album, and one other which my father had also owned: Live/Sold Out at Carnegie Hall.

On the occasions when my brother and I go visit our parents at the same time, we have to share a bedroom – but we’ve found over the years that doesn’t really work, as one of us will generally keep the other awake with their snoring, or constantly getting up to go to the loo throughout the night. Consequently, martyr that I am (who likes to sleep as much as possible, so there’s more than just an element of self-interest in the decision) I will volunteer to sleep on the sofa instead.

On a recent visit to my folks, I was delighted to find that said album was one which had survived Dad’s vinyl cull when they moved house a couple of times in the past fifteen years or so, and was even more delighted that it had the dust blown off its grooves fairly regularly, even though I was woken up by it one Sunday morning.

Here’s my favourite track from it: 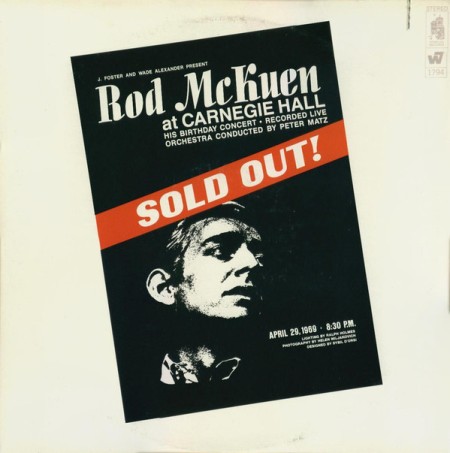