Right. Time for an explanation.

Tonight’s mix is not the one I had planned to post.

The one I had prepared was a little too upbeat for such a momentous weekend; whilst I personally won’t be joining in the nation’s mouring, I didn’t want to disrespect those that are.

And so I decided to create a mix “on the fly”; I decided what the first and last track would be, and then started recording as I journeyed from one to the other.

I tell you this instead of offering sleeve notes, as there will doubtless be those who think some of my selections are….disrespectful. That wasn’t the intention. The intention was simply to pick tunes which sounded good next to each other – any which may seem to have been chosen as some sort of comment on any recent high profile passings are entirely coincidental.

So let’s crack on, shall we?

(By the way, because this mix is just shy of 2 hours, Google Drive can’t cope and won’t let me upload it, so the link below takes you to my old Soundcloud account. Hope it works ok!)

That should keep you occupied for a while.

When I’m not doing this, or binge-watching shows on Netflix, or, y’know, working, I spend a lot of my time listening to comedy shows on the BBC radio iPlayer, one of my favourite shows being “The Unbelievable Truth”, a panel show hosted by David Mitchell.

The premise of the show is that each panellist delivers a short lecture which is entirely false, save for five pieces of true information, which they must try to smuggle past their opponents, cunningly disguised amongst the lies.

A recently re-broadcast show announced – spoiler alert – the fact that a 1992 US report, entitled “The Effect of Country Music on Suicide”, demonstrated that cities with a higher than average country music radio market share had higher suicide rates, independent of other factors such as poverty, divorce rates or gun availability.

It’s possible that the subject matter is one of the causes of this phenomenon, and the show went on to cite the following country song titles as examples: “If I’d Shot You When I Wanted To, I’d Be Out By Now”, “You’re the Reason Our Kids Are So Ugly”, “My Wife Ran Off With My Best Friend and I Sure Do Miss Him” and “I Still Miss You, Baby, But My Aim’s Getting Better”.

In my search to corroborate that all of those really are titles of country records (they are), I stumbled across a few more which tickled me: “How Can I Miss You If You Won’t Go Away?”, “I’d Rather Have A Bottle In Front Of Me Than A Frontal Lobotomy”, and “I’m So Miserable Without You It’s Like Having You Here”.

If you listened to the Kershaw session version of “Paintball’s Coming Home” by Half Man Half Biscuit that I posted yesterday (and if you didn’t, you really should), you’ll have noticed that it started with a version of a completely different song, which has a great title, if not as great as some of those.

This one, in fact: 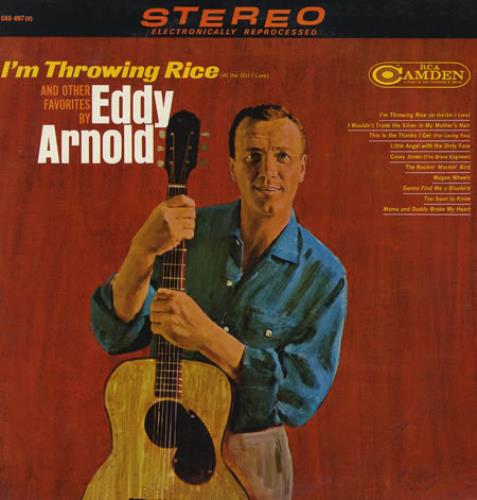 Eddy Arnold – I’m Throwing Rice (At The Girl I Love)