I mentioned last weekend that I’d watched and enjoyed the documentary on The Nightingales, King Rocker, which aired on the Sky Arts channel last weekend.

I can’t pretend that I was particularly familiar with their musical output before watching the doc, and must admit I was drawn to watch it because of the involvement of comedian Stewart Lee. In fact, the only record I knew of by The Nightingales was their involvement in this, the rather wonderful collaboration with label-mates We’ve Got A Fuzzbox And We’re Gonna Use It and Ted Chippington under the name The Vindaloo Summer Special, and even then they were the one act of the three I knew nothing about.

Here’s the trailer for the documentary:

Now, I can’t pretend I came away from watching with a sudden burning desire to buy all of The Nightingales records – as you’ll have seen from that clip, they’re not to everyone’s taste – but I would recommend that you check out the documentary: it’s very detailed, passionate, and inspiring, and more often than that, it’s very very funny.

There is one song from the doc which I’ve dug out, this one from their 2015 release Mind Over Matter, which appears at the end of the film:

…which ironically, works a lot better when you see it with the accompanying film shot, I believe, exclusively for the documentary:

Props to Samira Ahmed for her faultless lip-syncing.

King Rocker is currently airing on the Sky Arts channel and will doubtless make it’s way onto the NOWTV streaming platform shortly. Check it out.

Last one for this weekend.

And I’m not sure that, strictly speaking, this qualifies as a summer record.

But, since part of the name of the act includes the word “Summer”, I’m posting it. The thread’s called “That Summer Feeling” for a reason. My rules. Moan and I’m taking my ball home.

I first stumbled across this record back when The Chart Show was still on Channel 4 on a Friday evening. I was aware of the female part of the three acts involved, through their “Rules and Regulations” 12″ which I’ve mentioned before, my brother and I both having purchased copies of it, in all its one-side-music-the-other-side-etched-caricature-of-the-band glory.

It took me a looooooonnnnnnnnnnngggggg time to track down a copy of this record. In fact, it was a good 15 – 20 years later that I finally stumbled upon it in Kelly’s Records, the second-hand record stall in Cardiff’s indoor market.

It was also, I think, my first introduction to the deadpan brilliance that is Ted Chippington, of whom I’ve also banged on about quite a bit here before, so I’ll spare you this time.

I speak of this: 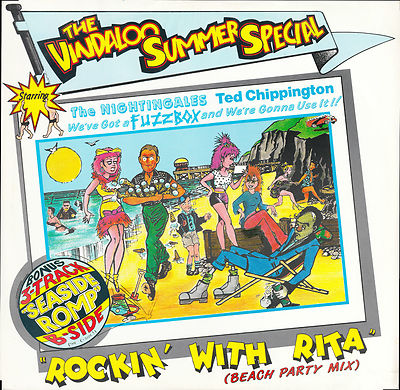 The Vindaloo Summer Special – Rockin’ With Rita (Head to Toe)

I bloody love that record. Cheesy smile on my face whenever I hear it.