Something a little different tonight.

If you’re especially cool, and just happened to be at a loose end on New Year’s Eve, like all the cool kids did, then doubtless you will have found that there was a new option in the short list of things to do to greet the New Year in.

For as 2017 turned into 2018, as well as the usual choices of getting drunk, sleeping and watching Jools Holland’s Hootenanny,  this year there was the added possibility of listening to Erol Alkan on 6Music. He’s also been standing in for Gilles Peterson for the past few Saturday afternoons on the same channel.

Erol’s been a bit of a hero of mine for quite a few years now, ever since me and a little gang of my mates ventured up to a holiday camp in Southport for something called Global Gathering around 15 years ago, and I stumbled across him playing in one of the side rooms.

Alkan is renowned for playing DJ sets which refuse to conform to the standard idea of what a club DJ should be playing, and so it was on this occasion that amongst all of the beaty dance stuff, he dropped tunes like The Cure’s The Walk, The Cult’s She Sells Sanctuary, and Madonna’s Vogue.

I love him, but he’s an Arsenal fan, so I can never truly submit.

Shortly afterwards, back in Cardiff, I was browsing the racks in the now sadly defunct Fopp! when they started playing a mix CD, which piqued my interest. To save anyone’s embarrassment by having to ask the staff, or possibly to limit the amount of time staff spoke to nerdy shoppers, there was a “Now Playing” sign on the counter, with the CD case leaning against it. I knew I had to have it as soon as Soulwax’s E Talking (Nite Versions) featured, and moments later I was striding towards the counter, double CD set clutched in my hand.

The cute girl at the till gave me a knowing look. She knew that I had fallen into the trap, taken the bait she had laid.

“Good choice,” she said, scanning the barcode, a knowing smile playing across her lips.

“So it sounds,” I replied, thinking how clever I’d been to not say “So it seems” like normal people do, the losers, but to change it to “So it sounds” because I could hear the CD I was buying as we spoke.

The conversation went no further and like many other women I’ve met she didn’t sleep with me, but on the plus side I owned an absolutely wonderful  double mix CD.

The CD in question was Erol Alkan’s Bugged Out/Bugged In CD, and this is CD2, the 75 minute long Bugged In Mix. The Bugged Out Mix is full of party bangers, the Bugged In Mix is somewhat quieter.

Some of the songs, or different versions of them, may have featured here before, but I thought of posting them all by myself and without any help or inspiration, honest. 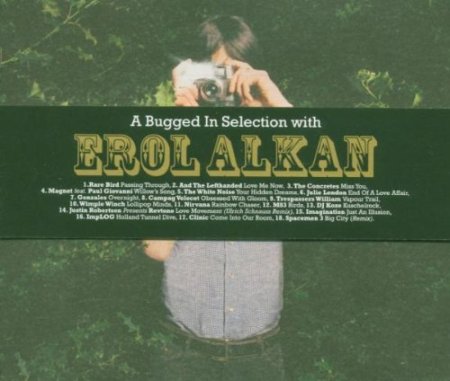 Erol Alkan – A Bugged In Selection

Get it whilst my bandwidth can cope.