Today’s lesson: be Beck, and rope a load of your mates in to record tributes of certain albums you love. Record the whole thing in one day. Job’s a good ‘un.

Let me explain. Back in 2009, Beck set about his new project, Beck’s Record Club, the idea being that he would gather together an ever-changing group of musicians, charged with recording a new version of an entire classic album within 24 hours. Yes, it does sound like it has Nick Knowles written all over it, doesn’t it?

As far as I can establish, they got through five albums, all of which were download only for a short period of time (i.e. I can’t find them to download or purchase anywhere now – I’m happy to be corrected on this, of course!). Those five albums were: The Velvet Underground’s The Velvet Underground and Nico, Leonard Cohen’s Songs of Leonard Cohen, Skip Spence’s Oar (nope, me neither), Yanni’s Yanni Live at the Acropolis (ditto), and INXS’s Kick.

The musician’s for the first four of those included Nigel Godrich (who is perhaps better known as a producer, particularly associated with Radiohead), Binki Shapiro (from Brazilian/American rock supergroup (it says here) Little Joy), Will Berman, Ben Goldwasser and Andrew VanWyngarden from MGMT, Leslie Feist, all of Wilco, actor Giovanni Ribisi (Phoebe’s brother in Friends, Scarlett Johannsen’s mostly absent husband in Lost in Translation, to name just two places you’ll probably know him from), and Devendra Banhart and Thurston Moore, who I will assume need no further introduction.

As you can imagine, with the time constraints imposed, coupled with an ever-revolving line-up that would have made Mark E Smith jealous, the songs are often a tad on the ramshackle side, including much of the album today’s choice is taken from.

But not this track. Featuring Anne Clark on vocals, who is now much better know these days as St Vincent, this is their take on Never Tear Us Apart: 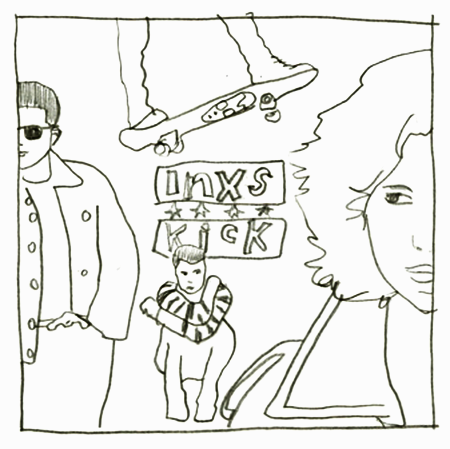 And this, for compare and contrast purposes, is the original:

Doubtless, we’ll be returning to this project some time again in the future.

In other words: more soon.