In my younger days, I was quite the susceptible type. Easily swayed.  Particularly when it came to music.

At some point or other, probably a few years earlier, I heard the Mighty Quo being interviewed on Radio 1 by Tommy Vance. It was a Desert Island Discs type affair, with Rossi and Parfitt (the ones you’ve heard of) picking songs which were important to them, or that they just plain liked, playing them in between regaling us with tales of their rock’n’roll lifestyle.

One of the songs they picked was the first of those included in today’s post. It was by a band I was already familiar with, and I featured “Labelled With Love” by them in one of my earlier “Sunday Morning” posts.

But other than that, and “Cool for Cats”, I’d never heard anything else by Squeeze until that day.

And then Parfitt picked this: 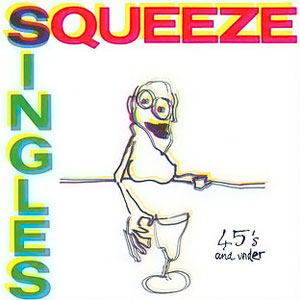 Squeeze – Another Nail in My Heart

I was smitten, (at least in part because of who had recommended it) and spent the next I-don’t-know-how-long scouring the second hand section of Andy’s Records in the hope that someone would have discarded one of their albums. Eventually, I gave up and shelled out for their Greatest Hits collection, “45’s and Under”.

In that album, I had a friend for life. 12 songs, each and every one an absolute pearler.

And it meant that I now owned what I have come to view as one of the greatest singles ever released:

Squeeze – Up The Junction

If I had cows, I would listen to that until they came home. It’s often said that Ray Davies of The Kinks writes lyrics which tell a story of everyday London life, that paint a picture, whatever euphemism you care to choose. For my money, Chris Difford is right up there with him. And Glenn Tilbrook writes a pretty mean tune too.

Squeeze have been in the news recently. They were coaxed out of semi-retirement to pen the theme tune to the TV dramatization of Danny Baker’s marvellous, hilarious autobiography “Going to Sea in a Sieve”, the series being renamed “From the Cradle to the Grave”. A short while ago, the band were invited onto the BBC’s Andrew Marr show, a Sunday morning political show, to perform the song. Here‘s what happened. Bless ’em.

Oh go on then, here’s the single in full, as performed on “Later with Jools Holland”

One Friday morning at school, me and my mates were sitting in our form group, chatting about the night before’s edition of Top of the Pops. One song came up who I had never heard before but had enjoyed. I did not tell my peers I had liked it, for it was performed by a winsome folky acoustic female.

Her name came up in conversation, and one of my buddies, Matt, said he really liked her song. I – to my eternal shame – uttered words which would never again fall from my mouth.

“I liked that too, but didn’t say anything in case nobody else did.”

I know, I know. I hang my head in shame.

I remember Matt looking at me incredulously, mouth agape. “Why would you not admit to liking something just because you think nobody else does?” he said. And he should know. He liked Simple Minds AND Whitney Houston and didn’t care who knew it.

Because I’ve been banging on about how great Quo are for the past few years, and to admit to liking this, the polar opposite of Quo, is tantamount to admitting I’m wrong, that’s why, I thought.

But lesson learned. Never again have I been ashamed to admit what records I like, no matter how others opinions might fall. Diversity in music taste is the making of a man. Or woman.

Which is why I do this, I guess.

By the end of the weekend, the album on which the song in question lived was mine.

Oh, what song was it? This: 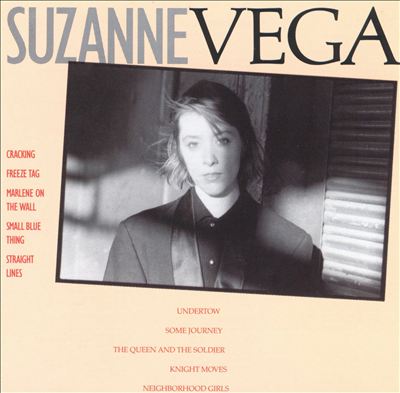 Suzanne Vega – Marlene On The Wall

Cheers, Matt, for pointing out the bleeding obvious to me. I owe you one.