Well done to you all, you completed another level in this game that we call life, and got through the week relatively unscathed (I hope).

Your reward this week is yet another all-new mix courtesy of yours truly. I know, I know, I’m too ruddy kind for my own good.

What have we got for you this week? Well, we kick off with John Lydon taking a break from advertising butter, waxing lyrical about Donald Trump and generally being a living, breathing caricature of himself, by popping by to say “Hello!” (although he practically scowls it, rather than saying it), followed by the second best record I own which samples the late great Bill Hicks, then a track by a guy I once saw about 15 years ago supporting Los Campesinos! (he was incredible, all guitar effects pedal, looped beats and other electronic gizmo-ness I can only explain like this: imagine if Ed Sheeran was entertaining and had something to say), then we’re off on a bit of a vegetable tip with Dan le Sac & Scroobius Pip and Kate Nash, followed by a side-swipe at the vacuous world of celebrity, topped off with a couple of classic old garage rock numbers which have been covered with much more success than they managed, a tune by one of the groups who recorded the more famous version of one of them, then a song responsible for probably my most favourite appearance on Top of the Pops ever, then a bit of Julian Cope and his bendy microphone stand, an overlooked rave-era classic before we’re back safely ensconced in the arms of Mr Lydon again.

There’s a modicum of swears on this one, so best I wheel out the ‘Effing and Jeffing Warning Sign’ for an airing:

Admin time: any skips or jumps are down to the mixing software; any mis-timed mixes are down to me; all record selections are mine, all mine, and you can’t take them away from me, okay?

You can, happily, download or just stream this though:

And here’s your track-listing:

Hope you kids have fun with this one.

In September this year, confounding everyone who ever knew the chain-smoking, pill-popping, line snorting me, I’ll turn 50.

Which means that I am now in my 50th year. I have completed 49 years, and the next level for me to tackle is level 50.

I mention this because I feel I have to. I’m a good few years older than all of my friends, but not inappropriately so, and I’ve watched them all hit 40, years after I did.

And this is by way of an apology to Hel.

For she had her 39th birthday when we still shared a flat together. But, unable to resist the temptation to pull someone closer to me in age years, to my eternal shame, I said this to her:

In my defence (by which I mean, I have no defence), I’d had a drink and was trying to be funny.

I won’t repeat her answer.

Whilst that’s techinically correct, I shouldn’t have vocalised it, of course.

I’m not sure what hit me first: the pint or the wine glass. Deservedly so.

(In case any of you wonder why I’m still single here, that’s your answer, right there.)

So, I thought I should mark the impending anniversary by way of a new series, where I acknowledge my age – yes, I’ve completed 49 years and so I’m now in my 50th year.

I’ve seen many bloggers do something similar before, by posting their favourite fifty records for example.

And that’s fine, I’m not criticising that, but I figured I should do something different.

I think, especially when you’re younger, the records you buy, or at the very least admit to liking, lead you into circumstances and company that you may not have experienced had you not pledged your affintity. Maybe it’s far more interesting to have a look at the records that I wish I’d bought, that I recognise now as moments when I could have been cool, when my love of the Quo or my Shakin’ Stevens patch on my parka could have been overlooked by my peers because at least I liked *insert name of cool band/record here*.

Here’s the rules: I’ll post songs which I love and own now, but which I didn’t buy at the time of their release. They must have been released after I bought my first singles with my own money, which was in 1981

So here we go, in no particular order, with 50 songs that I wish I’d bought at the time, but didn’t.

Because his plunge from the public eye was just as meteoric as his ascendancy, it’s very easy to forget what a massive pop star Adam Ant was back at the start of the 1980s. After quitting Adam and the Ants – who I really liked, but who, suprisingly enough, I never bought anything by at the time – he released today’s record,  which I’ve mentioned before, and love: mostly because it’s ruddy great, but partly because of his appearance on Top of the Pops, where he seemed to have the whole studio and every stage at his every whim:

So here’s the first single I wish I’d bought at the time to make me look cool, but didn’t, so I wasn’t: 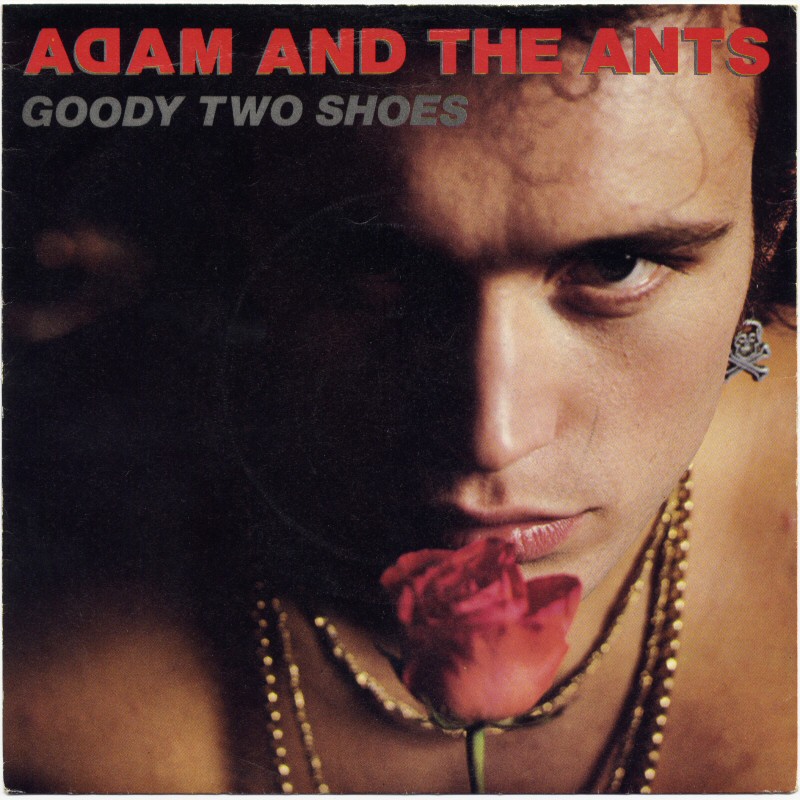 I didn’t really expect to revisit the output of one Stewart Godard aka Adam Ant so soon after starting this thread, but that’s exactly what I’m going to do.

On Saturday night, when I was out enjoying some gorgeous nosh, a friend and occasional reader of these pages and I got chatting about the reruns on Top of the Pops I mentioned the other day.

He’s a little younger than I am, though not as much as he claims, and we were talking, amongst other things, about which editions we could actually remember seeing.

I do have a vague recollection of seeing Sparks, mainly because Ron Mael’s curious moustache and death stare, though I wold struggle to say which song I saw them perform.

But when one of the editions I did remember when got reshown, I found myself bellowing “Yes! Four stages Adam!”

Which sounds like some kind of recovery plan, but in reality refers to the time that Adam Ant performed today’s tune – which never gets played out, and I have no idea why, because it’s such an absolute gem – and practically was given free reign of the Top of the Pops studio.

And here, if you’re interested, is that multi-stage performance on Top of the Pops:

Kudos to the Top of the Pops producers for recognising a genuine pop star and allowing him to do what he wants, even if it is a bit Benny Hill in places, and does feature Adam frankly not being arsed to lip-sync at one point, and also allowing him to display his proficiency on the polystyrene crumbling column as an instrument.

But still, “Goody Two Shoes” is one hell of a record: a blistering assault on the media’s obsession with digging up the dirt on the famous and successful. Oh, how so very little changes.