For those of us who weren’t able to make it to Glastonbury, the BBC footage was invaluable in feeling anywhere close to being there. Frankly, just this weekend makes the cost of the TV licence worthwhile to me.

Not least because every now and then, there’s a little treat that’s thrown up from the BBC set, which not only allows for the likes of Mark Radcliffe, Jo Whiley and some of those young people I don’t recognise to noodle on like they’re of some importance, but also allows bands to perform a song from one of their sets.

It was through this that I first encountered First Aid Kit doing “Emmylou” a couple of years ago, so, as always I was keen to see what they had lined up for this year.

Much of which failed to ignite the Dubious Taste passion, with the exception of one song. A song I already knew, possibly one of the greatest songs ever written.

Oh, and played acoustically, with an orchestra of kazoos on the fade out. Of course. 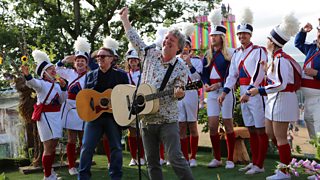