I don’t get to work from home often – well, ever, actually – so it’s rare that I get to listen to the radio during the daytime, during the week.

So today: the office is closed, and I’m at home, preparing for the journey up to see my family tomorrow by wrapping presents, and more importantly doing some laundry so I don’t have to cut the sad figure of a 47 year old man who still takes his washing home for his mother to do. All of this in the company of the finest radio station in the world, 6Music.

Mary Anne Hobbs – who I identify with not only for being the host of Radio 1’s late night dance music show, “The Breezeblock”, but also for being the former Mrs Miles Hunt (she won’t thank me for that) – has been sitting in for Lauren Laverne and she’s doing a mighty fine job, as anyone who follows me on Twitter will know: 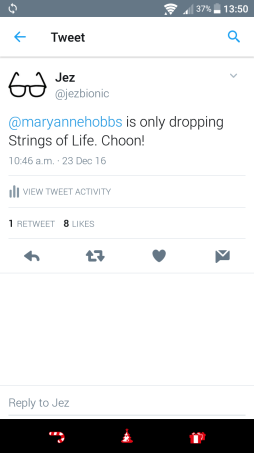 That’s the sort of intellectual tweets you can expect if you choose to follow me, by the way.

Anyway, she also played this, a Christmas record which I can’t believe I’ve never heard before: