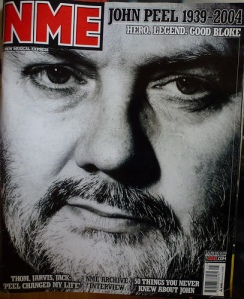 Ok, so it’s 10 years today since John Peel died. I don’t think I can let that pass without comment.

It’s rare when I hear about someone famous passing on that I feel anything other than indifference. But when Peelie shuffled off this mortal coil, I felt cold. A veritable shiver. The light that would never go out, had.

I’d love to be able to relate some story now about how I met the Great Man and how it changed my life, but I don’t have one, because I never did. But here’s two things:

Once, not long before he died, he asked on his show who it was that did a song that mentioned Brian Rix’s trousers. In his usual slightly befuddled manner, he’d forgotten, and when you have as many tunes rattling around in your head as he did, one’s bound to fall out every now and then. I emailed him (as did many others) and he thanked me (and many others) on air for doing so. This is the song:

Ok so that’s not a great claim to fame. I don’t have anything better than that. But in 1989 I went to the Reading Festival, and on the Saturday John was acting as compere. I remember him reading the football scores out, but insisting on starting with the Scottish results, because they usually get left till the end and nobody really pays attention to them. And this strikes me as being a metaphor for his life’s work: bringing the previously unheard to the attention of the masses.

Yes he played a lot of tosh I wasn’t interested in (I’m looking at you, Bhundu Boys) but for every 10 songs he played, you got at least 2 or 3 that you’d never heard before and wanted to hear some more of.

I could make a really long list of the bands I first heard via Mr Peel. I won’t, but here’s some of them. My life is richer for having them, and the stuff I consequently checked out, in there. Cheers, John!

The Primitives – Stop Killing Me Go buy it here: Killing

The Flatmates – Happy All the Time Go buy it here: Happy

And any Peel tribute wouldn’t be complete without this:

Links all repaired. Or done properly, if you prefer.

It is early 1982 and a major musical epiphany is on the horizon. But before that (and I have no specific stories to relate about it), scalded by my Jungle Boogie experience (which sounds like a fecking great name for a band by the way), I shrunk backwards.

The Beatles were popular, right? Let’s buy something by them. And then, just to make sure I didn’t try to get it played at a local cultural event let’s buy it on cassette. At the risk of coming over all Peter Kay: cassettes! Remember them?? ( I hope so. The word Cassingles will soon feature prominently. I say soon. I mean in about 15 years time. Bear with me.)

I’d borrowed the Red and Blue Greatest Hits from my aunt earlier, and loved every moment of them, so, desperate for recognition, I guess I regressed into my tortoise shell.

This is what I ended up with. Oh how I wish I could say the first album I bought was “Revolver” or “Sgt Pepper”. But no. It’s a mish-mash compilation at best, but the song I loved most of all was from “Revolver” so I guess I kinda win, right? Anyway, it’s this obviously McCartney penned- belter:

The Beetles: Got to Get You Into My Life

The spelling is deliberately wrong by the way, I’m just starting and don’t want any DMCA notices.

At this point, I would normally give you a link so you can go buy it, but, incredibly nobody seems to be selling it (this compilation, that is. You can buy Revolver very easily. You don’t need a link. In fact, don’t buy it, go buy Ella Fitzgerald’s version instead.)

A few years ago, a very good friend of mine (Hi Colin!) made his feelings about The Beatles known to me. Since they’re unlikely to feature much more here, this seems an appropriate moment to share this. He hated them. No, he REALLY hated them.

What he hated was not the music itself, but the very idea of The Beatles. To Colin, they were institutionalised music taste. He was being told what to do. “These are The Beatles and you must like them”. You were just supposed to like The Beatles without ever questioning it, because of who it was and what they represented. As a result, he bloody hated them. I very much admire his stance.

Actually, he’d REALLY hate the fact I’ve mentioned him in a blog post about how much I love The Beatles, which frankly just adds to the appeal of writing this.,

I’ve seen him, in a bar with a band playing a Beatles cover, standing on the dance floor, fists up, challenging anyone who wanted to dance to just give it a try. Which seems a tad extreme, but I get his point.

There is no reason in liking something just because it’s popular and en vogue. Why like something else because everyone else does? Right??? I’d have to like One Direction if that were the case and that ain’t gonna happen. They murdered “One Way or Another” for a start.

If only I’d met him 20 odd years earlier, you (and I) would have been spared a lot of pain.