One of the TV shows that I had recorded and finally got round to watching last week was “Rich Hall’s Countrier Than You”, where the American comedian takes us through a brief history of Country music, and illustrates the different styles by asking his interviewees to help him out with a song he’s written, ‘Working Dog’.

It’s a comprehensive overview, introducing me to many artists who I’d never heard of, letting me know what some (Robbie Fulks, predominantly) look like, and making me realise that there’s some artists who I really should have featured on these pages by now.

For example: how the hell have I been writing this series every week for almost two years (although it didn’t become a Country music only slot until some time later) and not posted anything by Hank Williams?

Let me rectify that immediately. Here’s his first ever single, released on Sterling Records back in 1947: 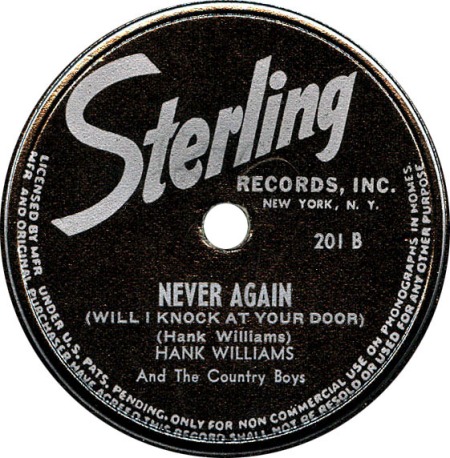 This didn’t sell well, however after signing to MGM records, the song was re-issued in 1948 as the B-Side to a song which became Williams’ first big smash: