Hello there, fans of mind-bending links between records. I left you last week with KT Tunstall’s “Black Horse and the Cherry Tree” as the song for you to suggest a record that connects to it and I’ll be honest, I was expecting to hear from the usual suspects, George and Dave, and probably no more. Instead, more of you have joined in, resulting in there being an unprecedented eight tunes of varying quality, including my own one, for you today.

But first, an apology; for two of those suggestions I’ve actually picked a different song by the suggested artist to that which was proposed, the reasons for which I hope will become clear, and acceptable, as we work our way through them.

So let’s kick things off with one of those that I’ve changed. George wrote this:

“And here’s my suggestion. KT Tunstall: Tunstall is one of the towns of Stoke-on-Trent. And Ted Chippington was born in Stoke on Trent. And he made a cover version of The Wanderer. So no comment showboating, just a simple link this week.”

Now, I only posted Ted’s version of The Wanderer a couple of weeks ago as part of my Friday Night Music Club, here. So George I hope you’ll forgive me for picking something different by Ted.

A couple of months ago, I wrote about how much I enjoy having songs on my iPod which have the late great John Peel introducing them, and this is one such example, which means I probably got it from one of my peers (Dirk..?), so credit where credit’s due. 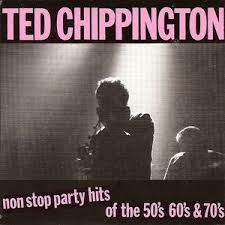 The next suggestioneer is The Great Gog, who, as is becoming traditional, gave me multiple choices to track down:

“As Gog Towers is located less than 10 miles from Tunstall, I also made the Stoke-on-Trent link. However, I opted for someone named after one of the other towns – namely Dave Fenton, who fronted the Vapors. Perhaps News At Ten from them rather than the obvious track? There is of course film & TV soundtrack writer, George Fenton as well, which would allow a posting of the Bergerac theme should you so wish.

Alternatively – and one you’d never get on the Beeb – the black horse has been the symbol of Lloyd’s bank for many years. Said establishment got name-checked along with their rivals at that time on Manic Street Preachers’ “NatWest-Barclays-Midland-Lloyds” from Generation Terrorists.”

Excellent! So working our way through that lot, we have:

The Vapors – News at Ten

Is it just me, or does that bear more than a passing resemblance to The Jam’s “Pretty Green” in places…? Anyway, I think we can all be thankful that I didn’t remember that one when I was doing my TV show theme the other week, or I might have extended it into a tedious fifth week.

And then there’s this, which I anticipate will be the least clicked link I’ve ever posted, which is saying something when you think of all the Quo I’ve written about:

..which I think we’ll gloss over rather quickly and move onto this:

I’ve said it before, and I’ll say it again: nobody wrote song titles like Richie Manic.

Next is Alex G’s suggestion:

“OK, the Stoke-On-Trent thing’s been done, so I’ll take a different angle. The KT in KT Tunstall stands for Kate Tunstall, so it’s a redundancy – it makes her Kate Tunstall Tunstall. First person who came to mind as having the same thang going on, y’all, is J.J. Jeczalik from The Art Of Noise. The J.J. stands for Jonathan Jeczalik. So I suggest “E.F.L.” by The Art Of Noise (or really anything they did while he was in the band – so not from the 1997 reunion).”

Your wish is my command. As far as I can work out – and I’m open to correction here – this only got released as the B-side to their version of Prince’s “Kiss”:

And that leads me to my own choice for this week. Mention of her name being Kate Tunstall Tunstall reminded my of an old David Baddiel joke about the L in LL Cool J standing for Lionel, making his name Lionel Lionel Cool J, so here’s something by Lionel:

Moving on to the second of the suggestions where I’ve picked a different tune to the one suggested. Charity Chic wrote this:

“KT comes from Fife and features in Vic Galloway’s excellent book Songs in the Key of Fife. So some Stevie Wonder would be nice”

The book title is, of course, a pun on Stevie Wonder’s “Songs in the Key of Life”, and I asked CC what song from said classic album would be his preference for me to post. His choice was Sir Duke, which I love, but I’m not going to post because CC does a thread where he posts songs which refer to other musicians, and I don’t have anywhere near enough Duke Ellington (to whom the song title refers) so I’m hoping CC does have some I can listen to.

Instead, I’m going for this little beauty:

Which leads me on to the final suggestion for the day, an absolute belter which had me sifting through my record collection, muttering under my breath about where my copy could have gone (it remains unfound), and the reason for leaving this ’til last, apart from it being such a great record, is that I love The Swede’s reasoning:

“The Black Horse in Ipswich and The Cherry Tree in Woodbridge were two of the earliest drinking establishments that I ever frequented. They were both left behind some time later, however, when me and my pals discovered The Greyhound, which in those long ago days of the late 1970’s served the finest Adnams I’d ever tasted. I remember it still.

So how about ‘Black and White’ by Greyhound?”

Oh, so happy to oblige. Cheers! 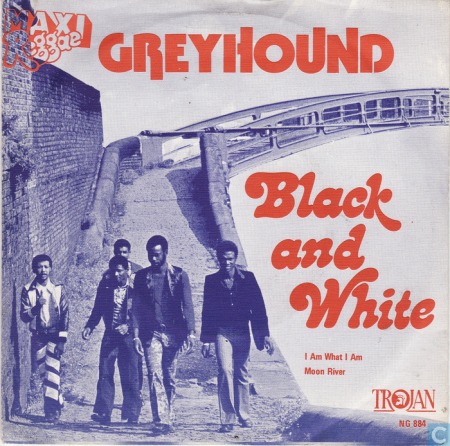 That really is pretty special.

So, thanks to all who have contributed to this week’s post. And here, featuring a very young Lemmy, is what the Radcliffe & Maconie listening public went for next: 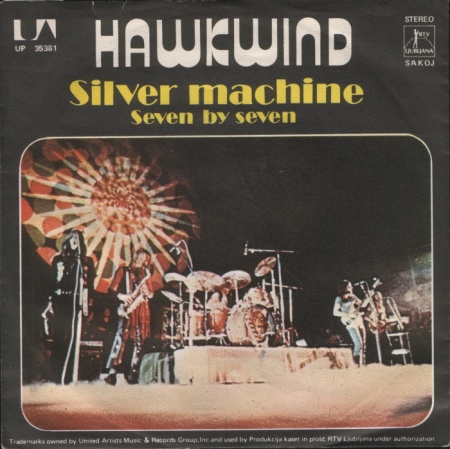 As usual, your suggestions please for a) what the link between the KT Tunstall track and the Hawkwind one is (and remember, don’t phone in, it’s just for fun), and b) what you’d like me to post next week that links to Hawkwind’s “Silver Machine”, along with an explanation of the connection. Pop it in the Comments box, and I’ll do my darndest to post it next week.