Back in November, I wrote about my sadly passed friend Tony, and as I came to write this post, I found myself thinking of him again.

See, Tony was one of the most quietly encouraging blokes I ever met, and at some point I must have told him I played guitar. I know this to be true, because I have a much valued photo of him pretending to play my (now also sadly passed) acoustic guitar.

At some point, when there was just the two of us, I must have played it for him, and sung too. And I remember that, because one evening at his house, he sprung on me my first ever gig: gathering a couple of friends and his parents round and insisting that I perform for them the song that I had played for him.

It was the first time I had ever played and sung unaccompanied (by unaccompanied, I mean that I wasn’t just playing along to a record) in front of more than one person and, truth be told, it probably wasn’t the finest solo performance, but it did give me a degree of confidence that hadn’t been there previously.

A year or so later, I was at college, in a band, and DJ’ing. And if I look back now, the latter of those two things would probably never have happened had it not been for Tony’s gentle “Come on mate, I know you can do this” that night as he thrust my guitar into my shaking, clammy hands.

I’m pretty sure that my old mate Richie was one of the unlucky few to witness that performance, and next weekend, on his birthday, Richie and I are hooking up for the first time in a couple of years, to go and see the band responsible for the song I sang in Tony’s front room that night.

I say “band”, but in reality, there’s only one person left from those days back in the late 1980s, but it’s the important one, the main man, the one and only David Gedge.

Next Saturday, we’re off to see The Wedding Present at The Roundhouse perform the whole of their legendary “George Best” album as part of the 30th anniversary of the original release.

The first gig I went to after I left home was The Wedding Present at Cardiff University’s Great Hall. It was a night that confirmed all I had hoped about life was attainable: that I could have a blindingly great night watching one of my favourite bands in the world, and not have to worry about waking my parents up when I went home. Which is pretty much all I’ve ever wanted out of life.

Since then, they’re probably the band that I’ve seen most often (yes, even more than I’ve seen The Quo). I have, quite literally, lost count of how many times it is. Once at Uni I managed to blag, via the student rag, a press ticket to see them at the Newport Centre , promising to write a review of the gig which never materialised.

And they never fail to deliver live: about ten, maybe fifteen, years ago, my friends Hel and Llyr saw them at the Reading Festival (I think, without wishing to sound too modest, because they knew how much I bang on about them, although they will probably say it was because there was nobody else on that they’d wanted to watch instead). Both regularly tell me how awesome they were that day.

I first heard The Wedding Present because of Tony, but it was Richie who, after my brother had piqued my interest by incessantly playing The Jesus & Mary Chain (who I initially hated, but, man, he wore me down), properly got me into indie music. I’ll talk more about that another time, but needless to say, next Saturday is going to be an emotional night for me and Richie; our friendship was forged over a mutual admiration of certain records, and cemented by our shared worldview and political leanings.

And, yeh, I know this sounds a bit naff, but Tony will be with us too.

So anyway, here’s the song I played for Tony et al that night. The opening track from “George Best”, the template for so many Gedge songs since, a story of a failing relationship told in the way that only Gedge can do. With some added, nonchalant, “Me? No, I’m not bothered, honestly” whistling for good measure.

For my money, Gedge is one of the great unsung heroes of British lyricists. Listen to his storytelling skills and try telling me that the likes of, for example, Arctic Monkey’s Alex Turner, doesn’t owe him a huge debt: 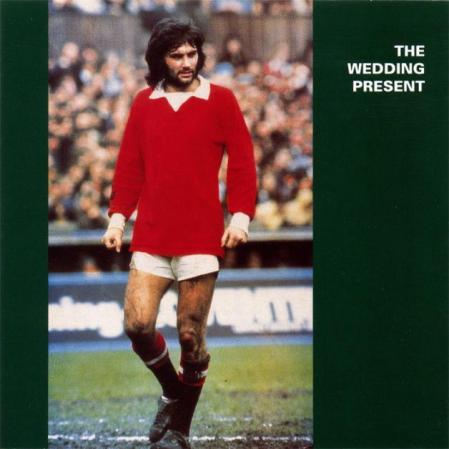 The Wedding Present – Everyone Thinks He Looks Daft

I’ve been listening to the “George Best” album as I wrote this. The next seven days can’t go quick enough, and I suspect next Saturday won’t last long enough.