I’ve spent the past couple of evenings binge-watching “Search Party” on All 4, the online streaming service of the UK’s Channel 4.

In case you’ve not watched it yet (and I recommend that you do), it’s a ten part dark comedy series set in Brooklyn (the suburb of New York, not the Beckham) following Dory, who learns of the disappearance of her school friend Chantal, becoming obsessed with finding her, dragging boyfriend Drew, and friends Elliot and Portia into her efforts to track her down.

There’ll be no spoilers here, but suffice it to say that the conclusion ties things up in exactly the way that most TV shows don’t.

It’s a lot better than I just made that sound, trust me. For a start, referring to having binge-watched it is not entirely correct, since each episode only lasts a little over twenty minutes, you can plough through the whole lot in one evening if you put your mind to it. Oh, and a word to All 4: if you can remember what shows I’ve watched, and where I’ve got to in a series I’m watching, then it shouldn’t be too much of a stretch to remember that I’m over 16 after you’ve asked me once and not ask me again before every episode. And anyway, has anyone ever been asked that question when they’ve been under the specified age and thought “Ah well, that’s me out then”? (This isn’t a rhetorical question; I was way above the age of eighteen when a situation first arose where I was asked to confirm my age before watching something online, but that’s…erm…another story…)

Ahem. Anyway. in Episode 3, at an all night vigil for the missing girl, an a capella group perform a version of today’s song, with results guaranteed to make you cringe: 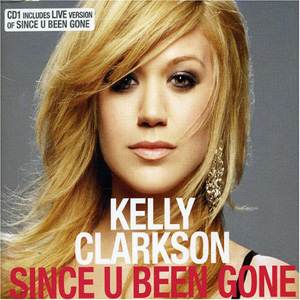 Kelly Clarkson – Since U Been Gone

Clarkson, of course, was the winner of the first ever series of American Idol, which should mean that I hate this, but I don’t. In fact, the only thing I don’t like is the spelling of the title. For a start: you’re not Prince, you’re not even Slade, so let’s have less of this “U” nonsense. And it should be You’ve, in any event.

Anyway, “Since U Been Gone”, if I really must call it that, was originally written with Pink in mind, but she rejected it, the fool, whilst Hilary Duff declined it as she couldn’t hit the high notes. It’s yet another song of positivity (aren’t they all in this thread?), an expression of relief by a woman escaping from a troubled relationship, something which is demonstrated not just in the lyrics, but in the way the song just explodes at the chorus.

I walked into a bar once when I was living in Cardiff, to find my friend and former flatmate Llyr involved in a heated discussion with Jamie, a guy we knew, who was attempting to ridicule him for having voiced the controversial opinion that he liked this record.

“No,” I remember Llyr saying, “just because I like something that you don’t, doesn’t make you right and me wrong. In fact, from my point of view, it’s completely the other way round.” Or put another way, Llyr wasn’t wrong for liking it, and Jamie wasn’t wrong for disagreeing, a notion which should ring a few bells with some of you.

So this one’s for you, Llyr.