As you get older, and it will come to all of you young fuckers (by which I mean fuckers who are young, not…) time seems to speed up. What seems to have been a mere blip on the radar turns out to be a week, a month, six months, a year, more, longer.

Sometimes these anniversaries pass you by, and it’s only as they’re disappearing in the rear view mirror that you go “Whoa! Wait a minute! How did that happen???”

Let me give you an example. Every now and then, I meet up with people from my past. I like to do it, to renew those old friendships, to catch up, break some bread, or, as is more likely, drink some cider and have a curry. And without fail the first thing that is discussed is how long it is since we’ve last seen each other. And once that’s happened, we all stand, scratching our heads, looking baffled and, no matter how long it is, wondering where the time went.

Let me give you another example. Today, it is a year since I posted some stuff about John Peel on here (and frankly, blew my only two Peel-based anecdotes; I wasn’t exactly anticipating that I would still be writing this blog a year later or I would have kept at least one of them back).

More importantly, it also means that today it is eleven years since John Peel died.

Read that sentence again. It is eleven years since John Peel died.

Whoa! Wait a minute!! How did that happen???

How have we managed to live for eleven years without John’s guiding hand at the tiller??

Some might argue that we haven’t, and that it’s noticeable that since he passed the likes of Simon Cowell and his (e)X(crement) Factor have risen to prominence. Which is a fair point.

But let me let you into a little secret: much as I would like to blame the world’s ills on Cowell, there’s something else. We have the internet now. We can trawl for whatever music we want to hear without recourse to some Radio 1 DJ.

Back in 2004, the internet was not what it is now. We still needed John back then, to tell us what was worth listening to, and often playing us something that really wasn’t.

But fear not, I come here not to damn the man but to praise him.

Because that’s not to say that were he still here now we wouldn’t listen to him, because we would. And that’s the point: John saved us the bother of having to trawl through the quagmire of crap we have to now, he was our filter, our conduit, he syphoned away all of the excruciatingly bad records we’ve had to plough through since he was so cruelly taken from us.

Which is also why, in those eleven empty years, whilst the music has been out there, just the same as it always was, nobody has managed to step up to the plate and fill John’s shoes: his shoes are unfillable. In fact, it has taken a whole music station (by which I mean 6Music of course) to come anywhere close to doing what John did. On his own.

So anyway, here’s my record to mark the anniversary of his passing. Not the greatest version, but appropriately titled, a Peel session, and a band that John championed, seeing through all the “sixth-form Smiths pastiche” guff that was levelled at them during their all-to-brief time with us. 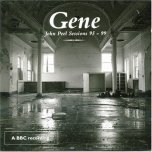 Gene – For the Dead (Peel Session)