So, this is the second post in this series, and yes I have changed the name. I hated the poorly punned title I gave this series last time out, so I changed it to a not-quite-so-poor-but-still-not-exactly-clever-is-it? slightly different title. And don’t bother checking what I changed it from, because I changed that too.

Anyway, this is the section where I post a record which features a sample of another record, and I let you hear them both, the sampler and the sampled, if you will. You try and work that into a usable pun, go on, I dare you.

Before I start, I haven’t forgotten about my recollections of 1985, I’ve just been really busy recently. (I appreciate this is bordering on an “I’m just really tired” or an “I’ve got a headache” type excuse. This is how I view you all, as an analogy I will make later on will prove.) (And by God I hope you’re sensing the tone there).

Anyway, this is why I’ve been busy: a friend of mine turns 40 next weekend, and I’ve been asked to compile a playlist for the party he’s throwing.

A playlist, mind, not a DJ set.

This stress of doing this right has taken up quite a lot of my spare time over the past few weeks.

A playlist, much as I love doing them, is to my mind, harder than DJ’ing. If I was DJ’ing I could just rock up, as I believe “the kids” on “the street” say (or did, in about 1990, or probably earlier) with my CDs and play whatever tickled my fancy to get the crowd rockin’ (note the missing ‘g’, I am sooo street).

A playlist, for public consumption, in a drinking atmosphere, where dancing is a possibility, is a different beast entirely. One has to try to drop the tunes at appropriate times, leave the floor fillers til the end, but keep the first couple of hours interesting enough that the natives don’t get restless and attempt to wrestle control of the sound system. (Those who know me, know exactly who I mean there…!)

A little over a year ago, my soon-to-join-me-in-the-40-club friend became a father, and to celebrate this joyous moment he decided he wanted him and a select crowd to go out on the lash, then hire a limo to drive around London for an hour or so, before going to a club. I was charged with providing the music for the vehicular instalment of the night, and I gladly obliged with a mix of songs which I think went down well with most of the small crowd (one notable exception, who tried to wrestle control of the sound system from me etc etc). One later posted on Facebook (other social media things are available) that he did not expect at the tender age of 39 to be driving round London in a limo, swigging cheap champagne and listening to “Kandy Pop” by Bis, which I took as a huge compliment, whether it was meant as one or not.

Anyway, I was hugely honoured to be asked to do something similar for his 40th, but a bar full of people most of whom I don’t know is a very different prospect to a limo with 11 people I do know. And as the night has tick-tocked ever nearer, so the slightly tweaked running order has changed, a song added here, deleted there, moved up the list somewhere else.

So. That’s what I’ve been doing. That’s my excuse.

Back to the topic in hand.

When you talk about records which have samples in them, generally we’re talking rap, hip-hop or dance records. But what we’re not usually talking about is a record by a couple of gothy Scottish teenage girls with a polka dot, lace glove and back-combed hair obsession. But, ladies, gentlemen and the undecided, I’m here to bring you one such record from 1985 which, when I heard the record from which the sample came, my little ears pricked up in astonishment, for I had no idea it was a sample at all until that moment, some 30 years after it came out. 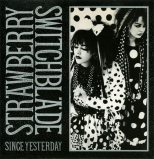 This is a record which has enormous sentimental value for me. Firstly, because my much cooler and better looking friend bought it back in the day, which meant that much as I loved it. I couldn’t buy it too (them’s was the rules, I didn’t make them up. Although, actually, thinking about it, I probably did).  Secondly, because after a break of over 20 years from DJ’ing, this was the first record I played at a house party (which was very much in the come-down stage of the event, I must hasten to add. Otherwise, it would have been Quo, obviously. That’s my requisite one reference done, oh smart arse big brother). The opening bars were met with a chorus of contented “Aaaaah”‘s and much snuggling on sofas, and all seemed right with the world, which obviously had nothing at all to do with the drugs and everything to do with my choice of record.

“Since Yesterday” was released in 1985 and proved to be Strawberry Switchblade’s only real hit, a couple of the later singles flirting with the idea of penetrating the Top 40, but ultimately deciding abstinence to be the more virtuous course (There’s your saucy analogy. Just checking you’re paying attention.)

And the sample? Well, a month or so ago I was sorting myself out a little Summertime playlist, popped the next song on, and then heard those “aaah”-inducing opening bars buried in this record from 1974 by a bunch of bleach-blond-mullet-and sideburn wearing, stonewashed denim combo lovers: 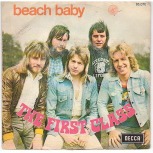 Anyway, as the former record is, apparently from 1985 (I have to be honest, I thought it was earlier) it does act as a rather convenient bridge between all which has consumed me recently and that to which I will be returning shortly.