Ok, so perhaps I should have warned you that things would get worse before they got better. Perhaps I should rename this blog “The Austerity Measures”.

Anyway, it is now 1981. In the three years since the purchase of Darts, whilst I haven’t bought any more records, I’ve immersed myself in my Father’s record collection (predominantly Johnny Cash and Kris Kristofferson albums), as well as borrowing albums from my relatives (The Beatles Red and Blue albums and The Life of Brian soundtrack. Read into that what you will). I’d also developed a taste for recording songs from the radio, and used to prepare a new tape each week, which I’d force the family to listen to in the car as we drove to visit my grandparents on a Saturday afternoon.

But in 1981 I found my first two obsessions with pop music. The first: Shakin’ Stevens. With the benefit of hindsight, I can probably look back at my love for the snake-hipped Welshman as a continuation of my interest in those doo-woppy records a la Darts from the first post. But this was an obsession alright. I perfected the dance. I sat perched in front of the TV every Thursday waiting to hear his latest song on Top of the Pops (and, like it or not, he was always on there). I even had a Shaky patch sewn into my Parka coat (but under the hood, so nobody could see it, until I stupidly hung it up by the hood and had the piss mercilessly ripped out of me by my mates at school).

The second: Bucks Fizz. I adored Making Your Mind Up, their Eurovision winner, so much that I sat hunched over my tape recorder, ready to pounce, until I’d filled up one entire side of a C90 cassette with it just on repeat, over and over again, for 45 minutes. I must have driven my parents to distraction playing that. I think this was probably my first real awakening of “those” kind of thoughts, teenage boy hormones which had been bubbling below the surface since I first clapped eyes on Debbie Harry a couple of years earlier. And here were two blow-dried guys whipping the skirts off two blonde girls, to reveal much shorter skirts and a whole lot more leg. Frankly, you could keep Cheryl Baker, it was all about Jay Aston for me. That’s her in the rather fetching white blouse on the record cover down there. Phewwww-ee, yes please mama.

These two songs feature in the same post as I bought them at the same time, from the same store, and were the first records I ever bought. Again, as with Darts, not a record store, but rather the record section of a supermarket my mother dragged me round a couple of times a month, called Rainbow, just outside Peterborough. Me wandering off to browse through the racks either here or in the newsagent nearby in the shopping arcade, John Menzies, if memory serves my correctly, became a regular occurrence from now on.

On this particular Saturday morning, I was desperate to buy something rather than just window shop as there was to be a disco, as they were still called back then, to be held that evening in the local village hall. Thrillingly, the disco was called “Jungle Boogie”; even more thrillingly it had been made known that the DJ would play any records that solitary groovers such as I cared to bring with them, and I was desperate for a piece of that action (see what I did there?). The two singles in today’s post were my weapons of choice.

Bear in mind 1981 was a time when great things were happening in the world of pop. Adam and the Ants were at the height of their powers. Human League’s “Dare” was about to hit the shops. The Specials had just had “Ghost Town” at Number One. There were so many records I could have bought that would have made me appear impossibly cool. Instead what do I buy? Bucks Fizz and Shakin’ Fuckin’ Stevens, that’s what.

The night was memorable for two reasons: Natalie, an older girl from the secondary school I had just begun to attend, told me I was a pretty good dancer, and my heart swelled with pride, only to be punctured again moments later when I had to leave the village hall, unplayed 7″ singles tucked under my arm, after the DJ had refused to play them since they were “fucking shit, mate”.

See if you agree: 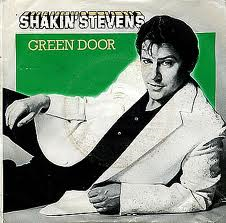 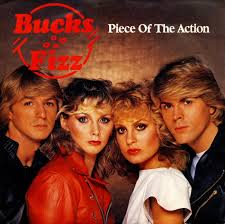 Bucks Fizz – Piece of the Action

PS  (1) – I’ll admit it: I still think Piece of the Action is a cracking piece of early 80s pop, and it always brings a smile to my face when I hear it. Partly because of Natalie; mostly because of Jay. Oh Jay. Sigh.